Spades is a trick-taking card game devised in the United States in the 1930s and became popular in the 1940s. It is a partnership card game that, like Bridge, is descended from the old English game of Whist. In general, the goal of each Hand of Spades is to predict or Bid on how many Tricks you will take during that hand.

Spades is a trick-based card game for 4 players. Players sitting across from each other are partners on the same team. The object of this game is to be the first team to reach 300 or 500 points.

Each player is dealt a hand of 13 cards from a 52 card deck. The hand is sorted by suit, then rank: Clubs, Diamonds, Spades, Hearts. Cards that are out of play are darkened. 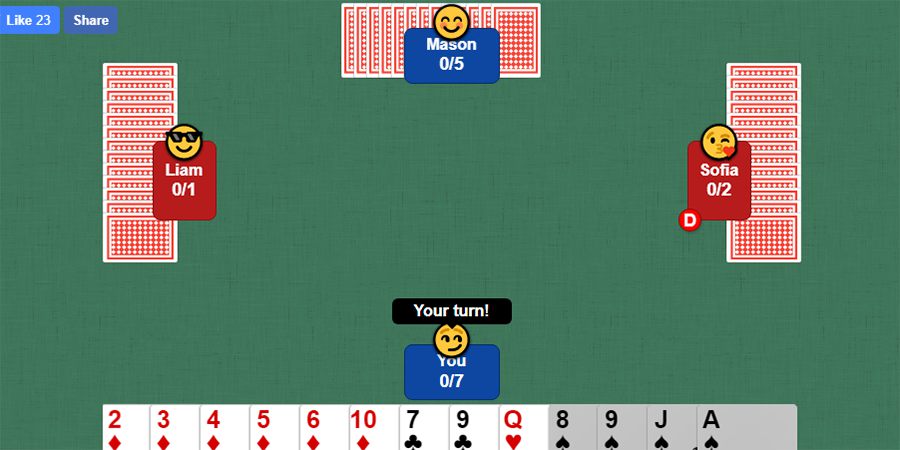 Starting with the dealer, each player in turn bids the number of tricks she expects to win. Possible bids are from Nil to thirteen. The sum of partnership bids are called the contract. If a player bids Nil, (meaning they expect to win no tricks), then they may, depending on the rule settings, be allowed to exchange up to four cards with their partner once everyone else has bid.

How to play Spades

The game begins with all cards being dealt. Each player plays one card and together they are called a trick. To start you must estimate how many tricks you think you can take with your hand. Your bid and your partners are then added together and this is the number of tricks your team must take. Play begins with the player to the dealer's left leading a card. The highest card in that suit wins the trick. Now for the tricky part and the reason the game is calls Spades. If you are out of the lead suit, you can play any card you like. If you play a Spade and no one else does, you win the trick. So Spades are trump cards. In this case the highest Spade wins. 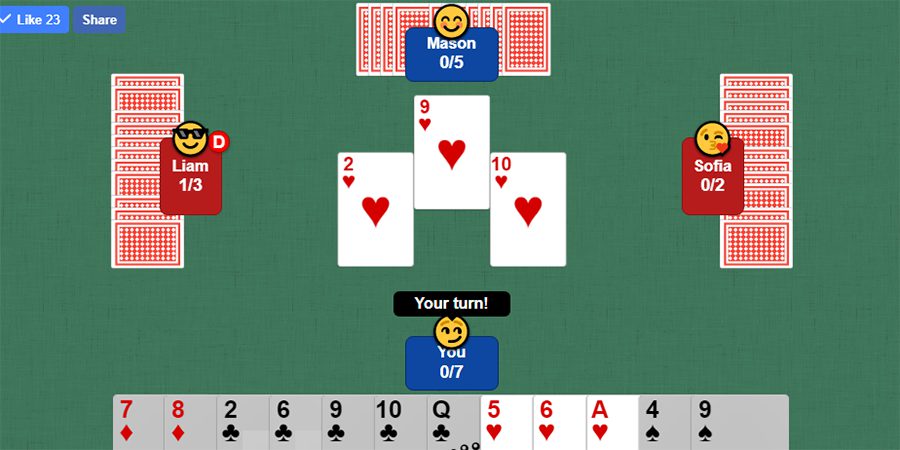 The game does not allow ties for first place. In the case of a tie for first, the game will continue until there is a clear winner. This is true of both games ending at a point value and timed games.

Tricks count ten points each for a partnership if the contract is made, and ten against if it is set. Bags, or tricks won in excess of the contract, count as one point each. This isn't a bad thing per se, but if you gather 10 bags you will deducted 100 points. Not all Spades games use bags, but ours does. You can opt to bid nothing which (Nil bid), if successful, will reap your team extra 100 points. -100 if you fail. For Blind Nil, these values are doubles (200 points).

About this Spades game

You can play classic Spades online on our website. And it's free! No download, no login required, simple gameplay! Also this free online game is available in mobile browser across all your Android, iOS and Windows devices. Good luck and have a good time!

How to play Spades game

- Spades is a partnership card game. Your partner in this game sits directly in front of you.

- First, you must bid on how many of the 13 tricks you think you can take.

- Each player plays one card and the four cards together are called a Trick.

- The highest card played on a trick (2 low, Ace high) wins it and Spades are Trump.

- Tricks count 10 points each for a partnership if the contract is made, and 10 against if it is set.

- If you go over your contract you will gather what's called a Bag for each extra trick you win.